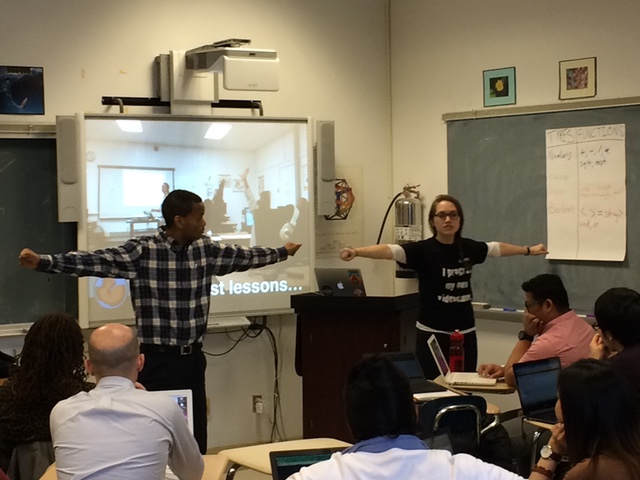 Districts and Sponsors: Bring a Bootstrap Workshop to your area!


In a Bootstrap workshop, you will...

You'll work with your peers to discuss content, pedagogy, and spend the day in your students' shoes. You'll have a chance to try activities from every single Bootstrap class. You'll be able to debrief with other teachers, talk pedagogy with the trainers, and try out the materials and software firsthand. And finally, you'll go home with a complete final project that you created.

You can also find us at a number of events throughout the year, including:

Depending on your district and the workshop being offered, you may be eligible to receive professional development credits for your participation, or even compensation for qualified attendees.

Massachusetts Teachers Bootstrap is a registered PDP (Professional Development Point) provider in the state of Massachusetts, for both math and science and technology teachers. Your time spent in a Bootstrap workshop will count towards your PDPs - just make sure you recieve our certificate at the end of the training.

Texas Teachers Bootstrap is a registered CPE (Continuing Professional Education) provider in the state of Texas. You will recieve a certificate at the end of the training that includes our CPE provider number, which you can submit to TEA at the end of each year to recieve your CPE credits.

Our Master trainers are fully-qualified to lead a complete Bootstrap workshop, having run Bootstrap professional development for years.

Apprentice trainers co-lead workshops alongside master trainers, and lead mini-sessions and follow-up PD for teachers across the country.

Endorsed trainers have attended a Train-the-Trainer session, and have facilitated portions of the Bootstrap PD when working with teachers. They are certified to run Bootstrap trainings in specific regions.

"It's a completely contained, self-differentiating, modular set of lessons that you can use to fit your needs. There's a low floor, no ceiling, and the potential for higher-order thinking is very high." "I was lucky enough to attend the workshop in Chicago. What a WONDERFUL USEFUL PD day -- the first one in a long while to get me excited about teaching Algebra for the 20th year. If you do come back -- I would love to know about it."
-- Aimee Smith, Chicago Public Schools "Bootstrap is groundbreaking in terms of meaningfully integrating CS into core subjects (in this case algebra) and packaging it in a way that is immediately accessible and understandable to students and teachers. I feel like this program is a benchmark to strive for when it comes to finding ways to integrate programming principles in schools, and was delighted by the emphasis on the importance of integrating math/programming as a means of equity. Teachers with whom I work routinely ask for programming resources that are tied to core subjects and Bootstrap is nailing that connection." "I loved the HANDS-On approach! Getting the computer into my hands and actually doing the programming was so important to me." "Thank you for the wonderful learning experience surrounding the Bootstrap Program. It was a fantastic demonstration of how our teachers can teach algebraic concepts within a real-world application that is personally significant to many of our students. There were so many wonderful things that teachers had to say about their experience."
-- Julie Staton, Lake County Public Schools "Amazing! Best math workshop I've ever attended! I can't wait to use this with our students."
-- Dana Kirby, Anne Arundel Public Schools "I wanted to tell you what a great PD you presented. It was probably the very best I've been a part of (and I've been to lots!). I can very clearly see how I could implement this with my students. I can't wait to see if I can get them engaged a little more than usual and have them making connections a little more deeply than usual."
-- Carol Mann, Ceiba College Prep Middle School